That weakness is compounded by a second problem: a return to the “T” design of older MagSafe connectors. In other words, this thing comes straight into the side of the laptop — the cable shoots out at 90 degrees — instead of hugging the side with the cord parallel, like the old “L” connectors. As a result, it protrudes a half inch beyond the left edge. You can’t rest the left side of the laptop on your thigh. It’s constantly getting bumped. And since the magnet has all the grip strength of an elderly gnat, guess what happens?

I ordered a Retina display MacBook the moment Apple announced them, and received it shortly thereafter. I had it for about two days, when the following happened. 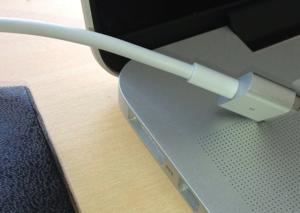 Not having noticed what had happened, I closed the screen. Apparently, the glass on Apple’s new screens is really thin, because it immediately broke.1

Obviously, I should have been more careful. But with either an L-shaped connector or the MagSafe 1’s stronger magnets, this probably wouldn’t have happened. And perhaps the thicker glass on the older MacBooks would have survived this accident. Tiny design decisions can add up.

I’m not the only one.

If you require a short url to link to this article, please use http://ignco.de/462

Want to read more like this? Buy my book's second edition! Designed for Use: Create Usable Interfaces for Applications and the Web is now available DRM-free directly from The Pragmatic Programmers. Or you can get it on Amazon, where it's also available in Chinese and Japanese.

Hi. My name is Lukas Mathis. I studied Computer Science/Software Engineering and Ergonomics/Usability at ETH Zürich. I work as a software engineer and user interface designer for a swiss software company creating process management software. I've written a book about usability. It's been translated to Chinese and Japanese. My first computer was a Performa 450, my first programming language was HyperTalk, my first electric guitar was a cheap Peavey, my first videogame was a VCS 2600 and my current snowboard is from Lib Tech. I live in a small cottage in a remote part of the Swiss Alps, and you can reach me at or on twitter.